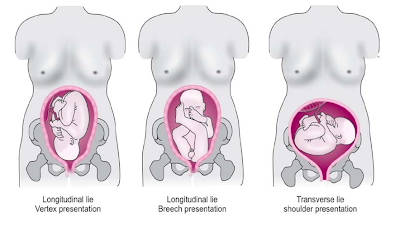 Vertex
head down in the pelvis 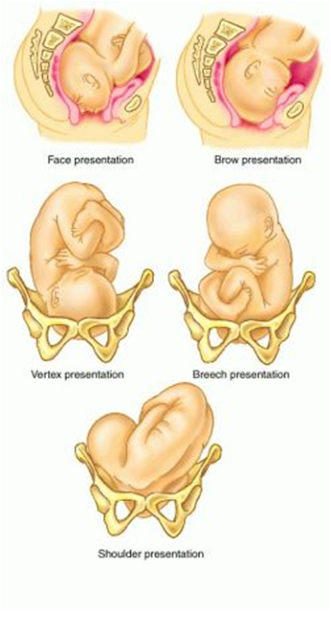 Relationship of fetal parts to each other:
Flexed
Deflexed
Extended 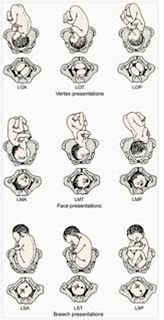 Questions to ask yourself when performing the exam:

Woman is supine, head slightly elevated and knees slightly flexed
If the doctor is R handed, stand at the woman’s R side facing her for the first 3 steps, then turn and face her feet for the last step (L handed, left side). 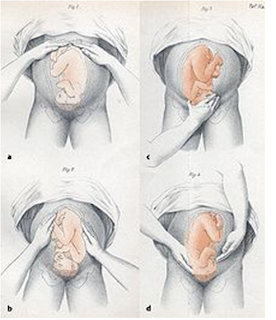 What part is in the fundus?

Facing the mother, palpate the fundus with both hands
Assess for shape, size, consistency and mobility

Fetal head: firm, hard, and round
Detectable by ballotement

Buttocks/breech: softer and has bony prominences

Determine position of the back.

Still facing the mother, place both palms on the abdomen
Hold R hand still and with deep but gentle pressure, use L hand to feel for the firm, smooth back
Repeat using opposite hands
Once you’ve located the back, confirm your findings by palpating the fetal extremities on the opposite side  (“lumpy”)

Determine what part is lying
above the inlet.

Gently grasp just above symphisis pubis with the thumb and fingers of the R hand
Confirm presenting part (opposite of what’s in the fundus)
Head will feel firm
Buttocks will feel softer and irregular
If it’s not engaged, it may be gently pushed back and forth
Proceed to the 4th step if it’s not engaged…

Amplifiers allow both the practitioner and parents to hear

*Always easier in later stages of the pregnancy

Where will you hear the FHTs? 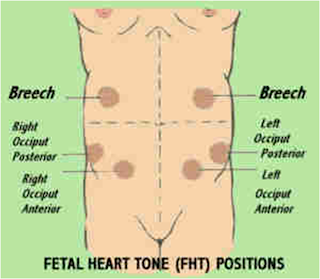