- It is  common, chronic, disfiguring, inflammatory and proliferative condition of the skin, in which both genetic and environmental influences have a critical role.

Variable in duration, periodicity of flares and extent.

May start at any age but is unusual before the age of 5 yrs.

In China, psoriasis is estimated to affect 0.3% of the population. 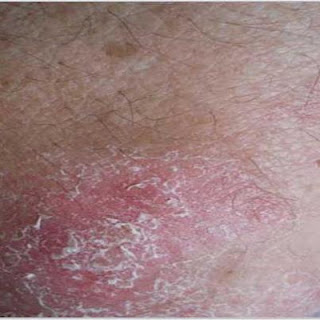 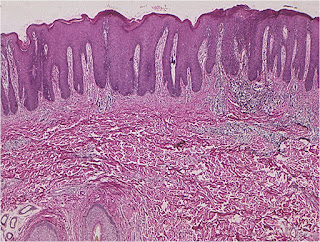 - Environmental risk factors
Interactions between genes and the environment are important in disease causation. Many environmental factors have been linked to psoriasis, and have been implicated in, for example, initiation of the disease process and exacerbation of pre-existing disease.
a) Trauma
Psoriasis at the site of an injury is well known (Koebner phenomenon). A wide range of injurious local stimuli, including physical, chemical, electrical, surgical, infective and inflammatory insults, has been recognized to elicit psoriatic lesions.
b) Infection
Acute guttate psoriasis is strongly associated with preceding or concurrent streptococcal infection, particularly of the throat.
Acute episodes of guttate psoriasis are much more common in individuals
with a family history of plaque psoriasis and one-third of cases of guttate psoriasis progress to the chronic plaque form.
Guttate and chronic plaque psoriasis share strong HLA associations, particularly with HLA-Cw6.
HIV infection has also been associated with psoriasis.
c) Drugs
There are many drugs reported to be responsible for the onset or
exacerbation of psoriasis. Important ones are lithium salts, antimalarials,    beta-adrenergic blocking agents, non-steroidal antiinflammatory drugs (NSAIDs), angiotensin-converting enzyme (ACE) inhibitors and the withdrawal of corticosteroids.
Patients with unstable psoriasis should receive appropriate advice before travelling to countries where antimalarial prophylaxis is required.
d) Sunlight
In minority of patients, psoriasis may be provoked by strong sunlight
and cause summer exacerbations in exposed skin.
Severely photosensitive psoriasis is predominantly female and
strongly associated with HLA-Cw6, family history and very early
age of onset . Photochemotherapy (PUVA) can be helpful in
these patients.
e) Metabolic factors
The early onset of psoriasis in women, with a peak around puberty,
changes during pregnancy and provocation of psoriasis by highdose
oestrogen therapy indicates a role for hormonal factors.
f) Psychogenic factors:- Stress
g) Alcohol and smoking
Alcohol exacerbate pre-existing disease but does not induce psoriasis. M>F. Heavy drinkers have more extensive and inflamed disease.
Smoking also associated with Psoriasis.
h) HIV and acquired Immune deficiency syndrome
Psoriasis, psoriatic arthropathy and human immunodeficiency virus (HIV) infection are well associated.
The prognosis of acquired immune deficiency syndrome (AIDS) in patients with psoriasis is poor.

a) Keratinocytes hyperproliferation.
Grossly increased mitotic index.
Abnormal pattern of differentiation which involves the retention of nuclei in the stratum corneum.

- Dilated, tortuous papillary blood vessels almost touch the undersurface of the thinning epidermis and are surrounded by a mixed mononuclear and neutrophil infiltrate, as well as extravasated erythrocytes
- Epidermal hyperplasia
- Patchy hyperkeratinization with parakeratosis
- Uniform elongation and thickening of the rete ridges
- Thinning of the epidermis over the dermal papillae
- Munro microabscesses formation

This describes the presence of small lesions, appearing generally over the body, particularly in children and young adults, and after acute streptococcal infections.

In the early stages, there may be little scaling. The lesions are from 2 or 3 mm to 1 cm in diameter, round or slightly oval. They are scattered more or less evenly over the body, particularly on the trunk and proximal part of the limbs, rarely on the soles, not infrequently on the face, ears and scalp.

Guttate lesions are normally profuse, and in the early stages the colour is not specific.

The diagnosis is made chiefly on the nature of the scaling, the general distribution and evidence for preceding infection. 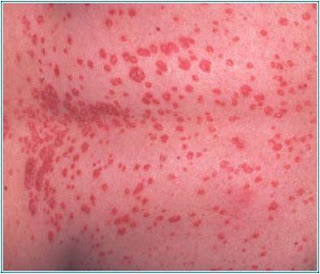 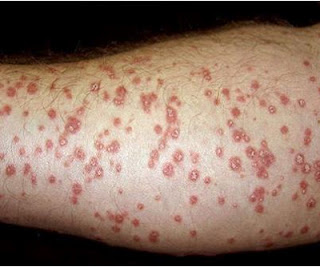 Skin becomes red or scaly; or occasionly red with little scale.
In some case case of erythoderma, hypo- or hyperthermia may develop d/t problem in temperature regulation. 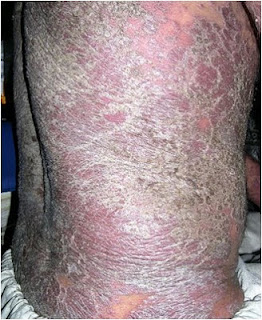 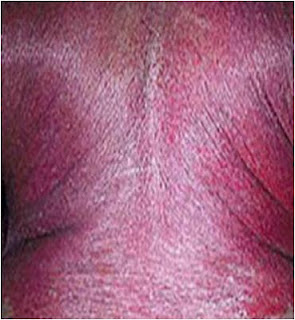 
Sudden onset with numerous small sterile pustules erupting on a red base.

Pt may rapidly deteriorate with pyrexia coinciding with appearance of new pustules.

Chronic eruption which comprises small sterile pustules on a red base and which resolve leaving brown macules or scaling. 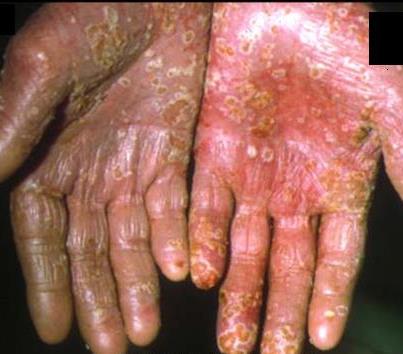 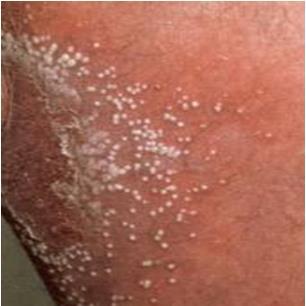 In pt with current or previous psoriasis

Email ThisBlogThis!Share to TwitterShare to FacebookShare to Pinterest
Labels: Dermatology